The Three Lost Kids and the Death of the Sugar Fairy 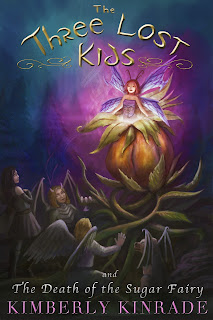 Halloween is here and Lexie, Bella and Maddie couldn't be happier. But why does everything feel so different? Fewer houses are decorated and fewer kids are out trick-or-treating. Still, that's not going to stop the three girls from eating as much candy as they can before their parents can stop them, even if that means fighting each other for it.

When they finally discover a haunted house worthy of their favorite holiday, they forget their parents' warnings and go in alone, only to discover that the house really is haunted, and not only that, but they've been transported to a whole different world!

A dying Sugar Fairy in one of the abandoned rooms send them on a quest to find her Sugar Baby and the magic Sugar Flower in order to save her and Halloween. If they fail, Halloween will be gone forever, and they'll never return to their family.

But with Sugar Bug attacks, the Cavity Caves where they must face their deepest fears, and giant gummy bears armed with candy cane swords, the girls aren't sure they'll make it.

Their only chance is to work together, using each of their strengths to help each other. Can they stop fighting over candy long enough? Or will they be trapped in the dying Sugar Land forever?


Defining Literature For The Under 18 Crowd
by Kimberly Kinrade

As a parent, I’m always on the lookout for great books for my kids. As a reader, I love to find a fantastic new author with whom to fall in love. As an author, Sr. Project Manager for Novel Publicity, and Marketing Director for Evolved Publishing, I’ve taken an interest in how books are classified, especially for younger readers.

The fiction genres for adults are pretty clear-cut. There’s literary fiction and genre fiction, and you find what you like within those choices. Some like to mix it up with a little of this and that, but whether you’re looking for romance, horror, magic, science fiction, or a thriller, you generally know what you’ll find within your genre.

For the under-18 reading crowd (and those of us who write for them), it’s not so simple. When does a child graduate from Goosebumps Horror books for young readers to real horror that would give grown men nightmares? How much is too much with the language, sex or violence?

Historically, children’s literature has not shied away from dark themes. I think back to the original telling of Cinderella and remember her evil stepsisters cutting off parts of their foot to squeeze into that coveted glass slipper. Hey, at least they were committed!

Even stories featuring younger children often portrayed them alone and fending for themselves. Guardians and parents were removed in order to give the child the freedom to move about the adventure and learn the lessons they needed on their own. This is still true in children’s literature and cinema, from Dora the Explorer to Harry Potter and the whole trend of boarding school books in Middle Grade and Young Adult fiction.

There will always be books that push the envelope of what some consider ‘appropriate’ for a particular age group, but, for the purpose of this article, let’s look at the ages typically assigned to each category and what they mean.

Picture Books: Ages 0-4: These are illustrated books that rely more on images than on text. For pre- to new readers, these offer a fun way to introduce children to the world of books. For the very little ones, you’ll often find a focus on learning numbers, shapes and letters, or an introduction to tactile stimulation (like furry baby ducks and leathery elephants). When my girls were in pre-school, their favorite book was Brown Bear. I still have it memorized!

Early Reader Books: Ages 4-7: As the child grows, they’re ready for more advanced reading. This is when the blend of dazzling artwork and engaging story become most important. You will see an example of this in Honey the Hero by Emlyn Chand. This is the first of the Bird Brain Books created for 4-6 year olds. Early reader books cross over between picture book and early readers, which are often lumped into one category.

Chapter Books: Ages 7-9: At this level, children are offered longer stories with chapters (previous books did not have chapters.) Most chapter books are not illustrated, or may only have a few black and white sketches. The focus is on improving reading fluency and comprehension. Two popular examples of this category are the Magic Tree House series and A Series of Unfortunate Events.

I have also written a series of chapter books, The Three Lost Kids, but chose to include full color illustrations (by Josh Evans) in order to appeal to younger readers who are ready for longer stories, as well as older readers who still love great illustrations. They are geared for 4-9 year olds, though older kids and even adults have enjoyed this series for the beautiful images and important life lessons. Lexie World, the first of the series, is written from the point of view of a six year old, Bella World from an eight year old and Maddie World from a nine year old. Each of my daughters helped create these books, so they are extra special.

Overall, none of these books are controversial, even if they get difficult to categorize. (Is it a picture book or chapter book?) But they can be scary. In A Series of Unfortunate Events, those kids face some pretty frightening situations and it’s not a happy book, as the narrator is fond of reminding the reader. Still, things are pretty tame in the world of the little people, but as they get older, defining their books gets harder. (Puberty makes every area of life difficult, doesn’t it?)

Middle Grade: Ages 9-13: This age bracket is really tricky. What’s the difference between Middle Grade and Young Adult (the next category)? Well, mostly, it’s content. Middle Grade books can be shorter to longer, there’s really no restriction. Think of Harry Potter; it started as a Middle Grade series, but became longer and darker with each book. In October I’ll be publishing The Reluctant Familiar, a book whose protagonist is a 13-year-old witch, so it could be MG, but it could also be YA. There’s a lot of cross-over here.

The general consensus seems to be that this category should be fairly tame with the language, sex and violence. Nothing graphic. Main characters tend to be younger (within the 12-14 age range) and are dealing with issues typical of those grades.

However, as I said, it bleeds into the YA category.

Young Adult: Ages 14+: This is probably the most problematic genre of all. Some think YA caters to readers as young as 13, or stops at 18. As the name of this genre (and it’s become a whole genre in and of itself) does include the word adult, I think it is for the older teens and, well, young adults. This genre (along with some MG) also has a huge cross over to adult readers (mostly female) well into their 30s, 40s and above.

The most challenging aspect of the YA genre is figuring out what’s appropriate for this diverse age group. Topics such as sex, drugs and violence are often explored in YA books, and have created conflict for those who feel we should be protecting young readers from such things. Is swearing okay? Depends on whom you ask.

Some are coining terms such as Upper YA or New Adult to further categorize books that have more mature themes. Generally a YA book has an older teen main character who is struggling with coming of age themes. Romance, sex, drugs, violence–these are all issues that many teens deal with, so a lot of writers choose to include them.

In my award-winning YA paranormal thriller/romance Forbidden Mind, there is light swearing, and some of these issues are touched on, though not graphically. Like Harry Potter, the Forbidden trilogy does get darker in Forbidden Fire and Forbidden Life. It’s not for everyone, but its target audience is the older YA crowd.

So where does this all leave us?

While there are some basic age delineations for different types of children’s literature, at the end of the day the choice has to be based on the child’s reading level and what parents are comfortable letting their kids read.

What works for one 12 year old might not work for another, and that’s okay. There are thousands and thousands of books out there, so there’s no shortage of reading material. It just takes a discerning eye to find a book that speaks to a child’s unique personality and preference. As a writer, you must write the story that is in you to tell, even if it gets flagged as too mature for young audiences.

At the end of the day, these lines are arbitrary and relatively new. There once lived children who read the same books as adults, and they turned out just fine. Many of them even went on to become great writers themselves.


Buy Your Copy Today: Print | Ebook
Be sure to add it to your TBR pile on Goodreads

Kimberly Kinrade was born with ink in her veins and magic in her heart. She writes fantasy and paranormal stories for children, YA and adults and still believes in magic worlds. Check out her YA paranormal novels Forbidden Mind and Forbidden Fire and her illustrated children's fantasy chapter books Lexie World, and Bella World, all on Amazon.

She lives with her three little girls who think they're ninja princesses with super powers, her two dogs who think they're humans and her husband, also known as the sexy Russian Prince, who is the love of her life and writing partner.

For a list of her books, check out:
http://amazon.com/author/kimberlykinrade
For a fun fan experience, join the team at I.P.I. at
http://IPIAcademy.com
For kids and parents of young kids, join the Lost Kids at
http://ThreeLostKids.com

a Rafflecopter giveaway
The Tour Continues:

October 23
Thrice the mischief, 3 times the love: Review and Giveaway