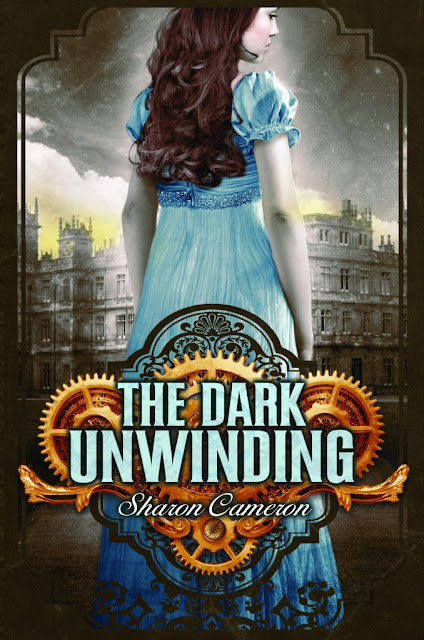 The Dark Unwinding is the debut young adult novel by Sharon Cameron. It is a Victorian mystery, centering on Katharine Tulman, an orphan who lives under the "kindness" of her Aunt Alice. She is sent to stay with her uncle, Frederick Tulman, to testify that he has gone mad so she can secure the dwindling family fortune for her cousin, Robert. However, once she arrives at Stranwyne Keep, Katharine learns that things are not at all what they seem and that maybe what is happening at the estate is more than madness.

The Writing of The Dark Unwinding was enjoyable, though a little confusing for me. I had a bit of trouble following the plot (mysteries that are too layered tend to lose me), and I spent a great deal of the book wanting to shake Katharine. There was a lot that we (the audience) are kept guessing at throughout the course of the novel. Is Uncle Tully mad or a genius? Is Katharine herself mad? Is there something deeper and darker going on at Stranwyne Keep? The mystery in the story was a bit complex for my taste, but if you enjoy mysteries, this will be a good book for you.

The characters in novel all have little secrets of their own. Mrs. Jefferies, Davy, Mary, and Lane each have something to hide from Katharine, but it is not their open disdain for who she is and what she came to Stranwyne Keep to do. They are all extremely loyal to and protective of Frederick Tulman, and they will go to any length to protect him. Their behavior is admirable to an extent, but they all become rather scary. If I was Katharine, I would have left after the first week, duties be damned. The estate was creepy, and there is no way I would sleep in a house with that many people who had it out for me. Even her only ally, the student Ben Aldridge, had secrets and became a bit frightening.

There is a quasi-love triangle in The Dark Unwinding, but the romance takes a backseat to the mystery and wonders of Stranwyne Keep. I never felt that Katharine should be with either one of the guys, but I completely understand her initial decision regarding them. That being said, I personally wouldn't have stayed around long enough to develop any sort of relationship with anyone there. Those servants were SCARY. I suppose the purpose of a gothic sort of mystery is to keep you on the edge of your seat, and Ms. Cameron definitely accomplished that. 3.5/5 Stars

Sharon Cameron was very successful in her World-Weaving in The Dark Unwinding. While I did not actually feel like I was in Victorian England myself (I can become quite immersed in what I'm reading), the setting was fairly plausible. Cameron based her story on William Cavendish-Scott-Bentinck and Welbeck Abbey. The idea of Stranwyne Keep and its residents was fascinating, but knowing that it was inspired by reality made it that much more interesting to read. Stranwyne Keep definitely counted as a character in the book. It was wonderfully described in a way that I could picture in my head. I would almost want to visit it, but for the servants (who would not have to worry about me ever darkening their doorstep). I suppose the peculiar characters being woven into the peculiarities of the estate made The Dark Unwinding that much more intriguing and enjoyable to read. 3.5/5 Stars

While the Pace of The Dark Unwinding was good, my Attention Span did not cooperate entirely. There was always something unraveling or a bit of action, but the set-up of the various enigmas and said action tended to drag a bit for me. The Dark Unwinding is a relatively short book, but it took me longer to read it than what I would have figured for its length. Since I was unable to really connect with Katharine, I suppose that also affected how much I was invested in the book. If nothing else, I stayed with the book to see how the novel would play out and if there would be a Happily Ever After for Katharine and the people of the estate. 3/5 Stars

The Extra Magic in The Dark Unwinding is none other than the very sweet "Uncle Tully". While being very childlike, he was so much more than expected. I always had a smile on my face when I read his scenes, and I never had any difficulty in understanding how a man obsessed with his inventions (okay, toys) could elicit such love, loyalty, and devotion from everyone who met him. 4/5 Stars

The Dark Unwinding is a suspenseful and interesting novel that I think mystery and historical fiction readers will enjoy. While it is classified as young adult, I think it will hold just as much appeal to adult readers.


The Dark Unwinding is available to purchase today at your local bookstore or online.
Amazon | Barnes & Noble | Book Depository | Fishpond
Be sure to also add it to your "Want to Read" pile on Goodreads!