Blog Tour (Guest Post & Excerpt): The Adventures of Austin Girl and the Legend of Diablo by Carrie Crain 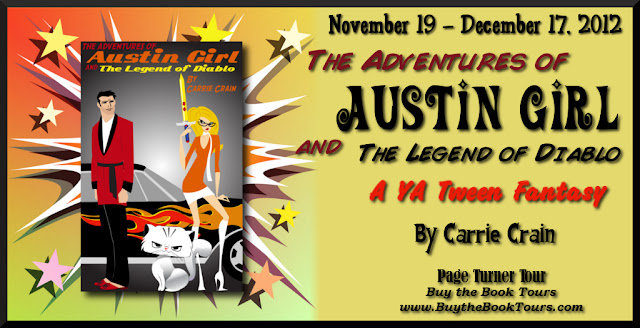 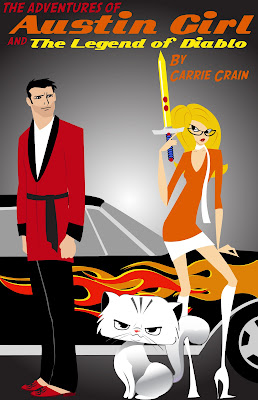 Austin Girl, a dispirited teenager, discovers a magic Samurai sword, leading her on a journey to Planet Disco to save her kidnapped Grandpa from the nefarious Diablo, and return to Earth before she becomes a permanent guest.

Carrie Crain is the author of the independently published tween novel THE ADVENTURES OF AUSTIN GIRL AND THE LEGEND OF DIABLO.

THE ADVENTURES OF AUSTIN GIRL AND THE LEGEND OF DIABLO, in a word, is bizarre. It’s the outlandish tale of a teenager named Austin Girl who discovers a magic Samurai sword, leading her on this quirky journey to Planet Disco to save her kidnapped Grandpa from the nefarious Diablo, and return to Earth before she becomes a permanent guest.

Growing up, I always wanted to be a comedic actress, or a famous self-destructive drummer who had a penchant for throwing lavish soirees and jet-setting to Hawaii just to buy a pound of Kona coffee. But, when my Hollywood dreams were crushed by a lack of confidence and, because I didn’t own any drums, I realized I had a plethora of crazy stories bottled up in my noggin. During a happenstance encounter with a former FBI agent turned Austin screenwriter of action and espionage, I decided to hone my own skills and enroll in screenwriting classes at UCLA and Austin and attend screenwriting workshops to better understand the purpose of slug lines.

It wasn’t until a crusty ol' Hollywood script coach, who by the way had the sense of humor of a dead tree, ridiculed my first screenplay. I decided to try my hand at turning all that painstakingly hard work into a short novel. I mainly did that to get the story out of my head and say to myself, “Hey, at least I wrote a book. See, here’s proof.” And, then pull the paperback out of my knapsack and show everyone I run into, including waiters in Kazakhstan, who speak only Russian and have no clue as to what I’m rambling on about. Whew!! Now, I can move on to other projects such as finishing my memoir, which is a collection of humorous essays about my wacky adventures with bipolar disorder, and my erotic/horror adult novel, which is based on another screenplay I wrote back in college. It’s 9 ½ Weeks meets Body Heat.

The sound of a backfire rattled store windows on the downtown street as Lucky Stevens parked his piece of hippy junk on the East side of Lucky’s Antiques located at 13 Concho Avenue. He drove a flower power Volkswagen bus. The bus was one of those rare 23 windowed jobs with curtains—a residence on wheels.

Straightening his suspenders, he stepped out into the dusty landscape, newspaper in hand. He moseyed past a 1960 black Chevy Pie Wagon parked up ahead, admiring the car. The hot rod was decked out custom style with red and orange flames painted horizontally across the sides and hood. He tipped his beaver Stetson hat to the female driver and grinned handsomely. The pink-haired woman was preoccupied with talking to a Magic 8 Ball and didn’t notice the fifty-year-old cowboy.

Scratching his chin, he leisurely strolled up to a period oak and stained glass door. He reached in his Wrangler jeans front pocket and extracted a set of keys. He put the key in the lock and opened the door to a familiar sight. His antique store was housed in a red brick building in Checkered Past, Texas. He could sniff out valuable antiques just by employing his sixth sense.

Lucky adjusted his string tie that matched his belt that matched his ostrich quill boots. He was in love with ‘vintage everything’ including his clothes and gentleman accouterments. Ambling through the door, he removed his Panama Jack sunglasses. His gait was deliberate, like a sore racehorse. Bells jingled like rowels on a spur letting out the sounds of commerce. Lucky may have been a little deaf, but he wasn’t so deaf that he couldn’t hear money jingle in the pockets of those who entered into his world.

Lucky flipped on the lights and made a silly face at the store’s security camera. Lucky laid his morning Austin American-Statesman newspaper down on the cracked countertop beside the turn of the century cash register, and looked at the time on his 40 year-old Rolex he’d won in a bidding war at an estate sale of one of Lyndon Johnson’s cousins so many years ago. It was still early for shoppers, just a little half past seven a.m. on Friday. A set of white pine plank stairs off to the side began to creak. They led to the attic. Lucky housed antiques there that were part of his private collection, including one secret item in particular that oddly wasn't for sale.

He ditched his attention to the paper and walked over to the bottom of the stairs, looking up into the darkness. “Skinny, you up there?” Lucky hollered sharply. His young stock boy didn’t answer. Shrugging, he turned around to walk off. A thump on his noggin sent Lucky crashing to the hardwood floor. His Stetson flew off of his gray haired head and skidded across the floor like ice on marble. Staggering to his feet, he rubbed the back of his head. “What the—?” 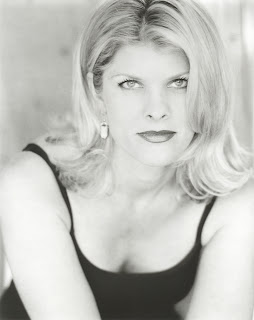 Carrie Crain received her bachelor of arts in Sociology from the University of Oklahoma and studied graduate-level screenwriting and creative writing in fiction at UCLA. She is a housewife and writer who is challenged by bipolar, anticipatory stress, and generalized anxiety.

Her debut tween novel, The Adventures of Austin Girl and the Legend of Diablo will be published by Two Crain Teen, an imprint of Two Crain Publishing, LLC in October 2012 and available on Amazon, Barnes and Noble, Sony Reader Store, and iTunes for ebook readers, Kindle, iPad, and Nook. Also available as a paperback online and at select indie bookstores.

If you’re on Goodreads, follow her there, now. She plans on doing some kind of #LegendofDiabloBookClub.

Crain wrapped up her first independent short she wrote and produced called Sould, which was filmed in Oklahoma last summer and included local talent as well as a Hollywood comedian and LA director. The story is about a zany film director desperate to enter a film competition and reluctantly picks a screenplay about a woman who sells her soul. The short will be entered in film competitions both in the States as well as abroad. For more information about her short, visit the Facebook Fan Page and follow along on Twitter.

Crain is currently penning her memoir, a collection of humorous essays, Sould: Memoir of Bipolar to be published in 2014, and is the story of a middle-aged housewife’s adventures with bipolar as she struggles to write the next Great American Novel.

She has been a freelance writer for Austin Monthly Magazine and was a contributing writer at Crazytownblog. She lives in Oklahoma with her husband and three dogs. For speaking engagements or book inquiries, please e-mail: wildcatterswife@gmail.com or tweet her @CarrieCrain.


You can also find Carrie on her Website, Facebook, and Goodreads.
Labels: Adventures of Austin Girl and the Legend of Diablo, Blog Tour, Buy the Book Tours, Carrie Crain, Excerpt, Guest Post
Email ThisBlogThis!Share to TwitterShare to FacebookShare to Pinterest