GUARDIANS INC.: THE CYPHER is two stories in one. A glimpse into a multinational company that is in reality the oldest of secret societies, one that spans close to seven thousand years of existence, weaving in and out of history, guiding and protecting humanity from creatures and forces that most of us believe are only mythology and fairy tales.

The other is the story of Thomas Byrne, a young man thrust into secrets he shouldn’t be aware of and dangers he shouldn’t face but, that he ultimately will, for he is a Cypher. The only one who can steer humanity’s future.

The ultimate conspiracy theory is that Magic is real. Kept in check by technology but, every five hundred years the balance can shift and, if it does, technology will fail and those creatures we’ve driven into myth will come back with a vengeance.

To protect the present, Guardians Incorporated needs to know the future.


How to Avoid the Rejection Blues
by Julian Rosado-Machain

Ah, the rejection blues! When all the hope built up during those long, interminable weeks that pass between sending a query letter or a manuscript and receiving a response is annihilated by the simple "Thank you, but...."

"Thank you," at least, shows a modicum of sympathy, but "but..."? I am sure that everything after the "but..." is optional. The "but..." seals the deal, what you wrote isn't good enough, at least to the "Thank you," people. They are grateful that you thought about them, they might or might not have read what you sent, discussed it, placed it on the table as a probable project, fought for it to be accepted by the uber-bosses of the company, it may have moved their hearts, changed their lives and they keep a copy close to the pillows...

Its unavoidable... rejection always feels like a stab in the heart, or at least the spleen, depending on who rejects the manuscript and your hopes about that literary agent or publishing house taking up on your manuscript.

It's going to happen, so don't avoid it... Embrace it, I once went to the home of a friend who had been left at the altar, an envoy of his parents to see if he was okay because he didn't answer his phone, my heart sank when I found the door to his apartment unlocked, and I went in and thankfully found him with a bottle of rum on one hand and watching Star Wars on a VHS, his words of wisdom that stuck with me I will now convey to you:

"Let me enjoy my depression in peace." He said. "I'll be over it tomorrow."

He was so blue he looked like a Smurf.

So yeah, embrace it, turn it around, go back and edit, fix, twitch and fiddle with your manuscript, then do it again. Or, if you get tired of the "but.." like I did, self publish, BUT (and this one applies) please, do it only after editing, fixing, twitching and fiddling...thoroughly and preferably with the help of a professional... at least the editing bit.

Hopefully, and with a lot of work,(and let's be honest, wishful thinking) you might hit it and then maybe the "Thank you," people will come looking for you and you will be the one saying "Oh wow!...This is great!..but..."

Wouldn't that be something?

So turn blue, embrace it, might as well try to enjoy it and use it in your writing, learn from it and then dream a little dream... and get over it.

BTW... my Smurfy friend found his Smurfette a couple of years later... and now they have little Smurflings of their own.

He got over it and so can we.


Buy your copy of The Cypher today!
Amazon | Kindle | Nook 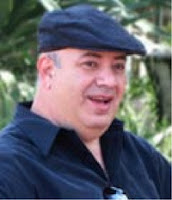 He's the co-owner of a Mexican restaurant in San Diego, California and enjoys the sun with his wife, three children, and cat.

You can find out more about Julian and The Guardian series on his Website, Facebook, and Blog!

Win a signed copy of The Cypher by Julian Rosado-Machain!
Just follow the instructions on the Rafflecopter form.