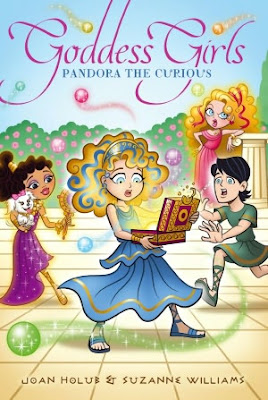 Is Pandora about to open up a box of trouble?

One of the few mortals at Mount Olympus Academy, Pandora is famous for her mega quizzical nature—not that she thinks there’s anything wrong with being curious, of course!

Her curiosity kicks into high gear when a godboy named Epimetheus brings a mysterious box to school. Epimetheus is the nephew of an MOA teacher in whose class Pandora once opened another box that sent a few weather disasters to earth. Still, Pandora can’t help but take a peek inside this new box when it unexpectedly lands in her lap. What could be the harm in that, right? Little does she know that opening the box will open up far more trouble than she ever expected!

Authors Joan Holub and Suzanne Williams put a modern spin on classic myths with the Goddess Girls series. Follow the ins and outs of divine social life at Mount Olympus Academy, where the most privileged godboys and goddessgirls in the Greek pantheon hone their mythical skills.

The Goddess Girls series by Joan Holub and Suzanne Williams puts a modern spin on classic Greek myths. Follow the ins and outs of divine social life where the most privileged godboys and goddessgirls in the Greek pantheon hone their mythical skills.
Praise for The Goddess Girls:

"Readers familiar with Greek myths should get a kick out of this plucky restaging."
~ Publisher's Weekly

Joan Holub in her own words - I graduated from college in Texas with a fine arts degree, and then freelanced as an art director at a graphic design firm for eight years. I dreamed of working in children's books, so I moved to New York City and became associate art director in Scholastic trade books, where I designed books for children and worked with editors and illustrators. It was a great job.

I illustrated my first published children's book in 1992 and soon began illustrating full time. I began completing manuscripts and mailing them out to publishers in the early 1990s. In 1996, I sold my first two manuscripts - Boo Who? A Spooky Lift-the-Flap Book (Scholastic) and Pen Pals (Grosset & Dunlap). Yippee!


You need not enter your twitter name for each entry. Simply enter it when you follow Joan and leave the others blank.