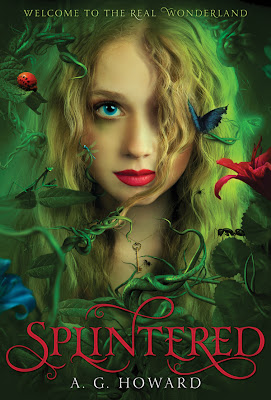 This stunning debut captures the grotesque madness of a mystical under-land, as well as a girl’s pangs of first love and independence. Alyssa Gardner hears the whispers of bugs and flowers—precisely the affliction that landed her mother in a mental hospital years before. This family curse stretches back to her ancestor Alice Liddell, the real-life inspiration for Lewis Carroll’s Alice’s Adventures in Wonderland. Alyssa might be crazy, but she manages to keep it together. For now.

When her mother’s mental health takes a turn for the worse, Alyssa learns that what she thought was fiction is based in terrifying reality. The real Wonderland is a place far darker and more twisted than Lewis Carroll ever let on. There, Alyssa must pass a series of tests, including draining an ocean of Alice’s tears, waking the slumbering tea party, and subduing a vicious bandersnatch, to fix Alice’s mistakes and save her family. She must also decide whom to trust: Jeb, her gorgeous best friend and secret crush, or the sexy but suspicious Morpheus, her guide through Wonderland, who may have dark motives of his own.

As far as Writing goes, Splintered was a very easy read that had many of the same qualities of the classic work to which it pays homage. It does not have the scope of oddities and poetry as Alice in Wonderland or Through the Looking Glass, but A.G. Howard does plant poetry that plays off nursery rhymes and other bits of the classic story. Many of Carroll's original characters emerge in the story, but they are used in such a way that they are utterly unique creations. Anything more that I could share would potentially be a spoiler, and this is a book you do not want to have spoiled in the slightest.

While I'm thinking about the characters, I should bring up some of the major ones. Alyssa is the heir of Alice Liddell, in that she's been called to Wonderland to fix Alice's mess, which she left behind as a child. Alyssa is a spunky character, and just a bit of a stubborn brat. This is a breath of fresh air in itself, since she is not a simpering airhead who is waiting on Prince Charming to love her and justify her existence or a depressed hard-ass who wallows in self-loathing because she is strong enough to survive. She's tough, she's powerful, and, most importantly, she embraces it. (You're shocked, right?) And, of course, she's the peak of a YA favorite - the love triangle. Taking up the other two places are Jebediah "Jeb" Holt, her best friend and "big brother", who follows her to Wonderland, and Morpheus, her secret childhood playmate that is much more than he seems. (I really don't want to tell you anything. Sorry.) I will go so far as to say that I'm leaning toward being Team Morpheus, as Jeb broke one of my very important "boyfriend material" rules.

The only complaint about the writing in the book is that about halfway through it, I suddenly realized that I had no idea what was going on. I was so distracted by Howard's lovely writing style and Wonderland itself that I was clueless as to what the point behind everything was. Yes, the answers are given at the end, but I'm hesitant to call anything a twist because I was not provided enough information to not see whatever it was coming. 4/5 Stars

The World-Weaving of Splintered was so magnificent that I was distracted from some gaps in the storytelling itself. A.G. Howard takes Carroll's delectable madness and runs with it, making a quirky, new dark world that has a broader appeal to modern reluctant readers. The creatures are almost like the originals, but spun off in such a way to make them more frightening and interesting. There is also a little similarity to Tim Burton's Alice in Wonderland a few years ago, but not enough to raise any eyebrows. Splintered is probably my favorite Alice adaption, and I'm beyond excited to see Howard's original worlds in the future. 4.5/5 Stars

As far as where the Pacing of the novel is concerned, the novel never failed to please. Splintered was action-packed, and there were no dragging plot points. Events were constantly occurring and scenery always changing, so I never once had time to get bored or distracted. 4.5/5 Stars

I think the best way to describe the Extra Magic of Splintered is to say that while Howard borrows heavily from Carroll's world and writing style, she makes her book unique. Alyssa is not a naive little Alice, and there is some pretty heavy sexy time. (Don't worry - it's nothing over PG. I said "sexy", not "sex".) As far as the twist about Alyssa's family - definitely something out of Howard's own imagination that I never would have come up with in my wildest fantasies on my own in a million years. Also, the cover is one of my all-time favorites, and those are some pretty heavy words coming from me. 5/5 Stars


Available for Pre-Order:
Amazon | Barnes & Noble | Book Depository | Fishpond
Be sure to also add Splintered to your TBR List on Goodreads!

To satisfy FTC guidelines, I am disclosing that I received a the traveling ARC of the book for a brief period of time from Krazy Book Lady in exchange for an honest review. Though the author provided the book to the tour, it has in no way affected the outcome of my review. All opinions expressed are rambling, honest, and completely my own.