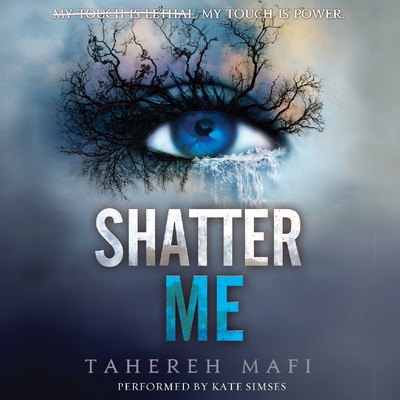 The last time she did, it was an accident, but The Reestablishment locked her up for murder. No one knows why Juliette’s touch is fatal. As long as she doesn’t hurt anyone else, no one really cares. The world is too busy crumbling to pieces to pay attention to a 17-year-old girl. Diseases are destroying the population, food is hard to find, birds don’t fly anymore, and the clouds are the wrong color.

The Reestablishment said their way was the only way to fix things, so they threw Juliette in a cell. Now so many people are dead that the survivors are whispering war– and The Reestablishment has changed its mind. Maybe Juliette is more than a tortured soul stuffed into a poisonous body. Maybe she’s exactly what they need right now.

Juliette has to make a choice: Be a weapon. Or be a warrior.

Shatter Me by Tahereh Mafi is probably one of the most beautifully written books that I have ever read. I also almost gave up on it completely after about 10% of it. Kate Simses, the narrator, was definitely Shatter Me's saving grace.

Since I listened to the audiobook, I think it changed the reading experience. (I cannot tell you if it was for better or worse.) For one, I missed out on the scratching out of phrases except for the brief ripping sounds in the audiobook. Honestly, I thought it was skipping at first. It was more annoying than effective. As for the flowery descriptiveness, I would have probably skimmed through most of that. Mafi used strings of similes and metaphors to say the simplest things. It was the most lovely overkill that I've ever experienced. It was torturous to sit through, being as it was used mostly to illustrate the hormonal explosions happening with Juliette. I have read borderline erotica that did not have heroines so needy and starved for human touch as that girl. Granted, she had spent nearly a year in solitary confinement at an insane asylum. That lusty desperation overshadowed the majority of the novel. Juliette was either pining over Adam, the boy thrown in the cell with her at the start of the novel, or waxing poetic about Warner, the twisted leader of the sector. I know that she hated Warner, but she infused much of that hatred with flowery descriptions of his hotness. Say what you will about me, but I will forever refer to this novel as The Passionate, Desperate Ramblings of a Lonely, Horny Teenager from this day forth.

As for the characters themselves, I did not find myself really liking, hating, or even feeling sympathetic to any of them. Juliette was a very weak person who let herself be defeated by her circumstances young girl who has gone through a lot. She wallowed, nay luxuriated, in self-hatred because of her ability and did not really think of herself as a worthwhile human being deserving to be treated as one until Adam began showing affection toward her. That pissed me off that she required a male for her own happiness made me very sad. As for Adam, he mislead her from the start, and I kept waiting for him to pull a trick out of his hat. That is not a good way to start a romance. Warner is a twisted, mean bastard, but he never tried to be anything but that. Juliette always knew where she stood with him and what he was capable of, whether she liked it or not. James was probably the only character I came remotely close to liking, but he did not come along until much later in the book. Unfortunately, he is very much a secondary character, and I don't see him progressing into much more than a cute kid on the sidelines.

The setting of the novel itself was interesting, but not enough to really redeem the book. The world was changed, causing death of animals, plants, and nearly humanity. A group called the Reestablishment took over the government and was trying to save what it could of the people around the world. The Passionate, Desperate Ramblings of a Lonely, Horny Teenager... Err... I mean Shatter Me is a dystopian, so the Reestablishment was, of course, portrayed as EeeeVille. Realistically, when times are tough, people get hard. Look at the Middle Ages. The whole concept was interesting, but nothing new. The setting was also used to get a bit preachy about environmentalism.

It would be unfair of me to at least not mention that the book picked up at the end, but it was too little too late. Juliette does put a damper on those raging hormones and becomes a tad bit more interesting, but it's in the last chapters. There is finally talk of the powers Juliette and others have developed, but it's really nothing new. *coughs* X-Men *coughs* I have hopes that she'll stay remotely interesting in the later books in the series, but I don't know if Ill stick with it to see.