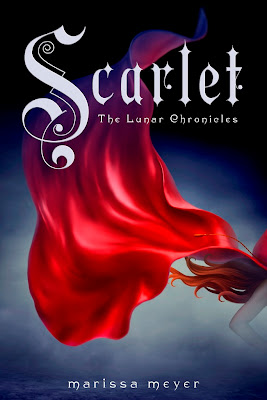 Cinder returns in the second thrilling installment of the New York Times-bestselling Lunar Chronicles. She’s trying to break out of prison—even though if she succeeds, she’ll be the Commonwealth’s most wanted fugitive.

Halfway around the world, Scarlet Benoit’s grandmother is missing. It turns out there are many things Scarlet doesn’t know about her grandmother and the grave danger she has lived in her whole life. When Scarlet encounters Wolf, a street fighter who may have information as to her grandmother’s whereabouts, she has no choice but to trust him, though he clearly has a few dark secrets of his own.

As Scarlet and Wolf work to unravel one mystery, they find another when they cross paths with Cinder. Together, they must stay one step ahead of the vicious Lunar Queen who will do anything to make Prince Kai her husband, her king, her prisoner.

I, like many other Marissa Meyer fans, have waited longingly for over a year to read Scarlet. I did not even request an ARC of the novel because it came out a day before my birthday, and it made the perfect gift. (There is no denying that the temptation to get my hands on an ARC was strong.) When the book came in the mail, I petted it - LITERALLY petted it! It has ridden in my purse for a week, just so I can snatch moments to devour the pages. It was a whirlwind romance. Sadly though, it did not sweep me off my feet. I'm so sorry, Scarlet - it's not you, it's me.

No, I mean it, it really must be me. Scarlet had all of the fantastic qualities that Cinder had: strong heroine; Iko; fantastic mix of sci-fi and fairy tale (Meyer is beyond genius in her execution of this); Iko; deliciously evil villainess; Iko (you see where I'm going with this). Little Red Riding Hood is even one of my favorite fairy tales! Scarlet and Wolf had all of the makings of interesting literary characters, but I found myself resenting the time given to their story. The banter between Cinder, Captain Thorne, and Iko (and all combinations thereof) was delightful. Maybe it was just me wanting more of Cinder and her story that disrupted my enjoyment of the novel. Scarlet wasn't a bad character - she was just as strong and determined as Cinder. I just had trouble connecting with her after I spent so long waiting to rejoin Cinder on her journey. I can say that Wolf is far too broken of a bad boy for my taste, and maybe it was the mom in me that wanted to smack Scarlet for taking him along.

All griping aside, Meyer's world-weaving is genius. The most fun part of reading Meyer's works are figuring out where her storytelling intersects with the original fairy tales. I started reading the novel asking myself questions like, "Does Wolf want to eat grandmother?" and "Where is the huntsman?" I did not find all of my answers, but I can tell you without giving anything away that Little Red Riding Hood lives on grandmother's farm, and the Big Bad Wolf is a street-fighter with a Big Bad Secret that could potentially affect the entire world. Grandmother is also in possession of some secrets of her own, which wove the story in Scarlet well into The Lunar Chronicles. I loved being introduced to more of this futuristic Earth, and I honestly cannot wait to read Winter, which is supposed to be set on the moon.

The fact that Scarlet did not completely work for me makes me no less a fan of The Lunar Chronicles, and I can still happily say it is the one of the most imaginative series currently being published. I'm dying to give Marissa Meyer another chance to make me swoon with Cress. Scarlet is an important building block for the series as a whole, and I will definitely reread it at a later date to see if my bad-naturedness truly played a part in my feelings about this book. I encourage you to check out these two blogs that gave Scarlet very high ratings: A Reader of Fictions and The Starry-Eyed Review.