Trailer Reveal & Giveaway: The Flame in the Mist by Kit Grindstaff

There's evil-a coming from up on the hill
If the Mist doesn't get you, the Agromonds will.


—From an old Anglavian rhyme

About The Flame in the Mist 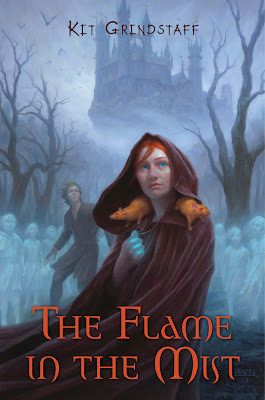 The sun never shines in the land of Anglavia. Its people live within a sinister mist created by their rulers, the cruel Agromond family. The Agromonds' control is absolute; no one dares defy them. But things are about to change, for the youngest of them is not like the others...

Fiery-headed Jemma has always felt like the family misfit, and is increasingly disturbed by the dark goings-on at Agromond Castle. The night before her thirteenth birthday, Jemma discovers the terrifying reason why: She is not who she thinks she is, and the Agromonds have a dreadful ritual planned for her birthday—a ritual that could kill her.

But saving her skin is just the first of Jemma's ordeals. Ghosts and outcasts, a pair of crystals, a mysterious book, an ancient Prophecy—all these gradually reveal the truth about her past, and a destiny far greater and more dangerous than any she could imagine.

With her trusted friend, Digby, and her two telepathic golden rats, Noodle and Pie, Jemma faces enemies both human and supernatural. But in the end, she and her untapped powers might be the only hope for a kingdom in peril.

Thunder roared, and lightning speared down. In its brief flashes, Jemma could see more shadows gathering. They looked like pale Mordsprites, small, bedraggled, skeletal. She lengthened her stride, but the ground was slick and she slipped, slamming face down in black mud. Hauling herself to her feet yet again, she came face to face with one of the shadows.

It was not a Mordsprite at all, but the gray silhouette of a child, a sunken-cheeked, hollow-eyed boy of no more than five, his ragged arms reaching out to her through the Mist.

Jemma stood petrified, her heart pounding as he swayed closer, oblivious to the chaos raining down around him. Others closed in behind him, a straggling band of waifs, all moving in the same direction.

Fast, creepy fun. A bit of The Addams Family, a bit of dark fantasy, and a boatload of monsters and magic make this read a ghoulish delight. - Stefan Bachmann, author of The Peculiar 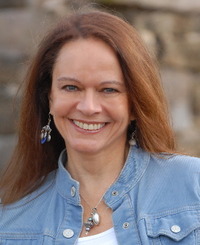 Kit Grindstaff was born near London, and grew up in the rolling countryside of England. After a brush with pop stardom (under her maiden name, Hain), she moved to New York and embarked on her successful career as a pop song writer. Kit now lives with her husband in the rolling countryside of Pennsylvania, where she still writes songs as well as children's books. The Flame In The Mist is her first novel.

Kit is offering a $30 Amazon or Book Depository giftcard to one winner!
INTERNATIONAL!

Ends at 12:01am EST April 6th
a Rafflecopter giveaway

Be sure to watch out for the
Blog Tour
from Modge Podge Books next month! 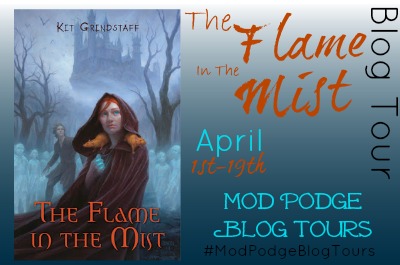