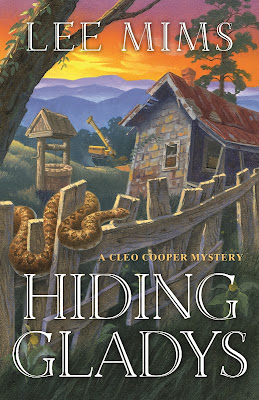 What’s a live rattlesnake doing sunning itself in the back seat of field geologist Cleo Cooper’s Jeep? Nothing good, you can be sure — but the dilemma of how it might have gotten there isn’t as crucial to her as making certain it doesn’t stay. Yet, alarming as such an uninvited passenger might be, more disturbing to the plucky, single-minded Cleo is the need to nail down her deal for mining rights to a rare, vastly valuable North Carolina granite deposit.

The problem is that the property owner, Gladys Walton, has suddenly and mysteriously disappeared, while neglecting to sign the final documents.

First, a murder interferes with locating her: is the woman’s body found dumped in a well that of the missing Gladys? Amid the wooded, rocky countryside, suspicious misdeeds multiply and Gladys’s conniving relations all behave extremely badly.

The increasingly provoked Cleo sees her dog shot, the progress at her job site dangerously disrupted and, finally, is made witness to another death. Whom can she trust? And what kind of distractions should she allow herself when so much is at stake? Both her charming but exasperating ex-husband and an even more seductive former lover are both on hand competing to rescue her; it’s clear to Cleo, though, that she must go it alone and risk the consequences.


Writing What You Know vs. What You Don’t
Lee Mims

It seems to me that when authors write about topics they really know, whether from study or from real life experience, they do their best work. For instance, a career forensic pathologist who also writes mysteries has a wealth of actual experience carving up bodies backed up with knowledge earned through years and years of advanced education to draw upon. On the other hand, if I, someone who’s not a pathologist, tried to write a story from the point of view of one, I’d have a very tough time. However, it’s not impossible. How would I accomplish this? Two things: research, of course, the more the better and expert readers you can trust. Preferably friends.

When I wrote the first book in the Cleo Cooper series, Hiding Gladys, I was writing what I knew both from personal experience, years working as a field geologist for a large mining concern, and from my education in Geology. I have a master’s degree in Geology, sedimentary petrology to be more precise, from UNC at Chapel Hill. However, my second book in the series, Trusting Viktor, while still a story from the point of view of a geologist with her own private consulting business; it has as its background, the oil and gas industry. In particular, it concerns deep ocean gas exploration, an area in which I have no prior work experience.

So, how did I write Trusting Viktor with no work experience? As I said, start with lots of research. I have a stack of articles, hard copies so I can go back to them quickly when needed, literally two feet tall in my writing area. I watched a zillion YouTube videos about exploration drill ships. Made a trip to Louisiana where I actually saw a drill ship, visited a museum made from one, fished off various types of offshore rigs and most importantly, I have friends in the oil and gas industry who read the manuscript for accuracy and realism.

Having said all of the above about writing what you know I offer the following counter to my own opinion. Once, after reading a truly amazing book of intrigue set in the world of spies and counterspies, I read the Author’s Note at the end of the book where the writer felt it was important to remind his readers that he wasn’t a spy, had never been a spy and that, in fact, he didn’t even know any spies. His book had completely captivated me, every word of it was so believable. He’d even gone so far as to say something to the effect of: it’s all fiction, folks, I just made it up. Those words still stick with me although the name of the author escapes me now.

I bring this up because often—too often according to my editor—I get obsessed with factual details, afraid that the “accuracy fairy” will suddenly appear, zap me with her magic wand and it’ll hurt. Seriously, I can get so wrapped up in the facts that they take away from the story and slow the action and worst of all, stifle my imagination. And that, boys and girls, you can’t have if you’re going to write at mystery that is both believable and fun.

Now if you’re a bean counter who at 45 still lives in the basement of his parents’ home in the suburbs of Small Town, USA, you may be asking, "Well, which is it? Should I stick with writing only what I know from my personal experiences or should I use my imagination and write a story about who I’d like to be?" My answer: a little of both. Every one of us, no matter how simple your life, has lots of personal insight and experiences to weave into a stories. You just have to use your imagination. 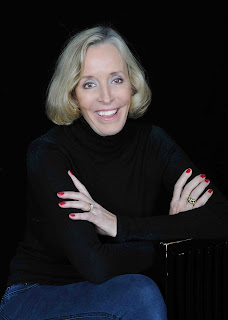 Lee Mims is and always has been a North Carolina farm girl. She played outdoors from dawn to dusk, built forts, drank water from garden hoses and ran with sticks. And for 25 years, she raised and trained Quarter Horses.

She was often sick as a child, and it was while staying home with her mother that Mims learned the beauty of words. Together they read endlessly: short stories, fairy tales and adventure novels.

Because of her love of the great outdoors, she later earned a master’s and bachelor’s degree in geology from the University of North Carolina-Chapel Hill and worked as a field geologist. And as a popular wildlife artist, Mims owns her self-named studio where she does both portrait and fine art oil paintings. She has two pieces on tour with Paint America and recently sold a painting to Ms. Andy Griffith for his museum.

Books never escaped her, and her geology background inspired Hiding Gladys, the first of the debut author’s Midnight Ink-published Cleo Cooper Mystery Series. Busy writing the next installment, Trusting Viktor, Mims is a member of Mystery Writers of America and Sisters in Crime.

She lives on a family farm in Clayton, NC with her husband.

March 26th
Interview and Giveaway at Books a la Mode