With one month to go until Moonset hits the shelves, we want to make sure you are all ready for it. Be sure to add Moonset to your TBR piles, and don’t forget to check out the giveaway below for $25.00 gift cards to iTunes and Barnes & Noble! Justin Daggett, his trouble-making sister, and their three orphan-witch friends have gotten themselves kicked out of high school. Again. Now they’ve ended up in Carrow Mills, New York, the town where their parents—members of the terrorist witch organization known as Moonset—began their evil experiments with the dark arts one generation ago.

When the siblings are accused of unleashing black magic on the town, Justin fights to prove their innocence. But tracking down the true culprit leads him to a terrifying discovery about Moonset’s past . . . and its deadly future. 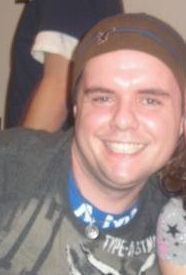 Scott Tracey is a YA author who lived on a Greyhound for a month, wrote his illustrated autobiography at the age of six, and barely survived Catholic school (and definitely not for the reasons you might think).

He is the author of Witch Eyes, chosen as one of Amazon’s Best LGBT Books of 2011, as well as an ALA Popular Paperback in the Forbidden Romance category. The final book in the Witch Eyes trilogy, Phantom Eyes, will be released in the fall of 2013.

He is also the author of Moonset, a new series which will be released April 8, 2013, as well as a contributor to the Shadowhunters & Downworlders anthology, edited by Cassandra Clare.

His career highlights include: accidentally tripping a panic alarm which led to nearly being shot by the police; attacked in a drive-thru window by a woman wielding a baked potato, and once moving cross country for a job only to quit on the second day.

His gifts can be used for good or evil, but rather than picking a side, he strives for BOTH (in alternating capacity) for his own amusement.

This Book Blast Was Brought to You By: