Review: In a Handful of Dust by Mindy McGinnis 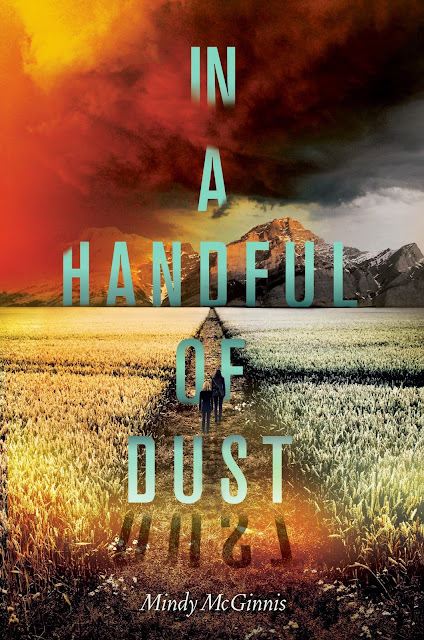 The only thing bigger than the world is fear.

Lucy’s life by the pond has always been full. She has water and friends, laughter and the love of her adoptive mother, Lynn, who has made sure that Lucy’s childhood was very different from her own. Yet it seems Lucy’s future is settled already—a house, a man, children, and a water source—and anything beyond their life by the pond is beyond reach.

When disease burns through their community, the once life-saving water of the pond might be the source of what’s killing them now. Rumors of desalinization plants in California have lingered in Lynn’s mind, and the prospect of a “normal” life for Lucy sets the two of them on an epic journey west to face new dangers: hunger, mountains, deserts, betrayal, and the perils of a world so vast that Lucy fears she could be lost forever, only to disappear in a handful of dust.

In this companion to Not a Drop to Drink, Mindy McGinnis thrillingly combines the heart-swelling hope of a journey, the challenges of establishing your own place in the world, and the gripping physical danger of nature in a futuristic frontier.

In a Handful of Dust is the companion to Not a Drop to Drink. It makes more sense as a companion, because although it contains the same characters, Lynn and Lucy (and others by the pond) are much changed in the ten or so years since the events of Not a Drop to Drink. Lynn is a grown woman, and Lucy is a teenager, no longer a small child.

In a Handful of Dust had a high bar to meet, because Not a Drop to Drink has been one of my favorite post-apocalyptic novels in its originality since I read it earlier this year. It was so stark and full of horrible truths, but with a underlying hope for humanity throughout. In a Handful of Dust didn't quite make the bar, but it was still a good companion novel. I'll read the next McGinnis book as long as it's in the same general arena of speculative fiction. I don't know whether I would like a McGinnis fantasy though, as graphic and stark as the events in her books tend to be, she might be comparable to George R. R. Martin.

Lynn is still a thoroughly compelling character. She was raised hard and trained to kill before allowing anyone near her pond. In a world where water is scarce, Lynn's pond was a treasure to protect. But finding Lucy and her family has changed Lynn in the ten years since she was alone at the pond. She is a little softer, and now is willing to do all those things that she had done to protect her pond, to protect her adopted daughter, Lucy. So when Lucy is a possible carrier of a disease, Lynn and Lucy leave the pond in search of California. The road to California broadens the world that was discovered in Not a Drop to Drink, but that outside world is just as stark and harsh as that by the pond. Lynn and Lucy face many perils on the road, including treacherous travelers, sickness, floods (ironic, eh?) and starvation and thirst.

I thought that the characters were better written in Not a Drop to Drink, in that we knew better what Lynn was thinking. Lucy takes most of the center stage in In a Handful of Dust, and while she's a likable character, she's also rather bland compared to Lynn. Lynn has changed in those ten years; she is somewhat softer in her love of Lucy, but she's also gotten harder and seemingly more like Mother. I think that some of that harshness would have been blunted as in Not a Drop to Drink had we seen more of Lynn's thoughts.

Some of the outside was a little too harsh for me, almost too harsh to be believable. Not to give away spoilers, but I just didn't believe in some of things that happened in Las Vegas. And, it was the only time during the whole adventure that I truly disliked Lucy. Her reaction to learning something was rather...immature, for lack of a better word.

I wish that there was more of a conclusion. I would have liked to know how Lynn fared (and I just don't believe her actions at the end).

I liked In a Handful of Dust, but it wasn't as great as Not a Drop to Drink. Lynn was still a fantastic character, but Lucy and some of the world elements lost a little bit in the companion. But, if McGinnis writes another science fiction or post-apocalyptic novel, I'll be reading it.