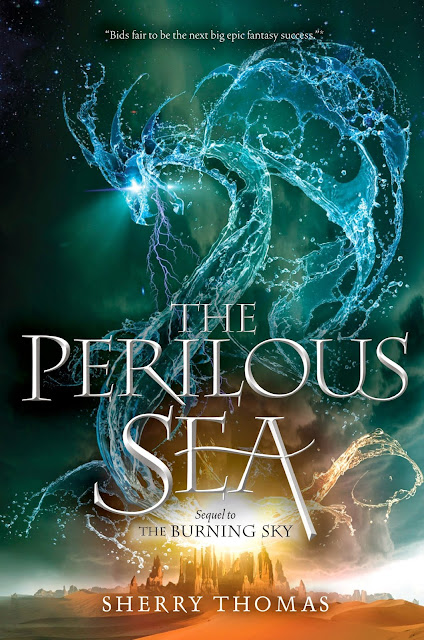 The Perilous Sea didn't feel like a middle book, and didn't really suffer from second book syndrome. This was probably because it was written differently than the first book. I enjoyed the split narrative - one present and one several weeks in the past. It was nail-biting to figure out how the characters got to where they are when we are reading about the past.

The second half of the novel is full of plot twists, surprises and big reveals, not that the first half isn't good. The second half is just impossible to put down. And, don't even try to get anything done after you pass the 70% mark. Game over, book must be finished. Thomas seriously tied up all those knots and brought the two timelines together.

I'm kind of worried about book three (not really), because with all the surprises in The Perilous Sea , what is left for us to learn? Except for how to kill the Bane, of course. And some other things I can't say because spoilers.

There were some world building issues (how exactly are the mage world and non-mage worlds connected? Where is Atlantis really? Were we told in the first book why Iolanthe can't vault because I don't remember why?). There are also some unanswered questions, but that could just be that they are answered in the third book (missing memories, anyone?). But honestly, I was enjoying myself so much (and loving Iolanthe) that the lack of world building wasn't even an issue. As far as the magic and fantasy goes, there's a grab bag full of all the fantasy tropes - dragons, wands, etc. (even a little bit borrowed from Harry Potter , the patronus, even though it isn't called that).

I'm SO glad that Kashkari and some of the other boys from school made huge appearances in this book. Kashkari is just awesome, and I want more of him in the last book. And Connor, poor baby, is just so fuddled and cute. I'm also glad that we really don't know who is working for Atlantis and who is a rebel - it makes it all rather suspenseful and edge of your seat. It doesn't help that some of the characters seem to be working with missing memories.

I loved that a huge point of contention between Iolanthe and Titus was the philosophical question of destiny. Iolanthe believed that she made her own destiny, while Titus first believed that prophesies guided destiny. I loved that there was the whole exploration of the full circle of destiny. Do prophecies come true because people try so hard to make them come true? Or no matter what happens will those events happen anyway? Do people have free will if their destiny is determined already? Is there anything we can do to change destiny? There's also the plot of whether the hero and heroine would end up together no matter what - even with amnesia and not knowing anything about each other would they still love each other?

Speaking of Iolanthe and Titus, there may have been some moments that I wanted to strangle Titus, but I love them as a couple. I love their banter; they make me smile with their silliness and sarcasm. Even though some events were heartbreaking, it was great seeing Iolanthe and Titus be strong together and apart.

All in all, The Perilous Sea is a great and satisfying second book in The Elemental Trilogy. Now, I need to go read some more Sherry Thomas historical romances to tide me over until next September.